(Here is a story I did for the NBC’s Meet the Press blog, press pass. The NBC version of story here.) 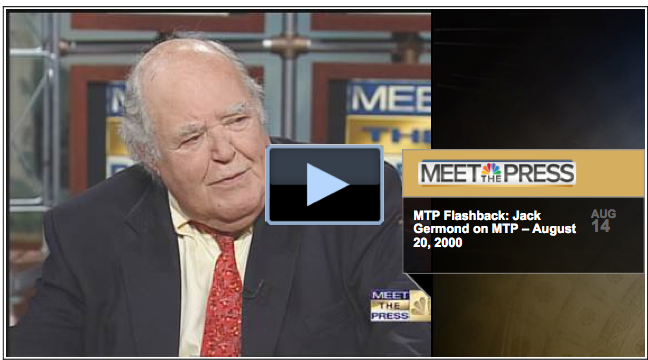 Jack Germond, a longtime political reporter for the Baltimore Sun, died this morning at age 85. During his 50 year journalism career Germond gained notability through his political columns, campaign books, memoirs and regular appearances on Sunday talk shows like Meet the Press. Germond’s career started at the Monroe, Michigan Evening News and he served as a reporter for the Rochester Times-Union. He was later a Washington Bureau Chief for Gannett Newspapers and finally became a reporter and eventual columnist at the Baltimore Sun. Over the years Germond gained a reputation as a candid and cynical columnist as well as a legendary political horse race handicapper.

Germond made 39 appearances on Meet the Press.

He was a regular commentator for Spivak as well as for MTP moderators Bill Monroe and Tim Russert. He appeared alongside notable guests such as Senator George McGovern, President George H.W. Bush , Governor Nelson Rockefeller , Senator Bob Dole, Senator Robert Byrd and Sargent Shriver. Germond made his last appearance on the program on July 11, 2004 with Tim Russert. Watch Germond’s entire appearance above during the 2000 campaign when he memorably said, “Why do we have to be theater critics?” when asked about Al Gore’s performance on television.